This morning I’m reviewing my results from 23andMe.  I’m feeling frustrated and exhausted. Starting to wonder if I am an alien baby thrown from a space ship as it was circling the sun.  The results came back on Thanksgiving 2014, but the closest relative located is a third cousin; we have four segments in common and potentially share the same great-great grandparent.  Do I get a C- in DNA testing results? 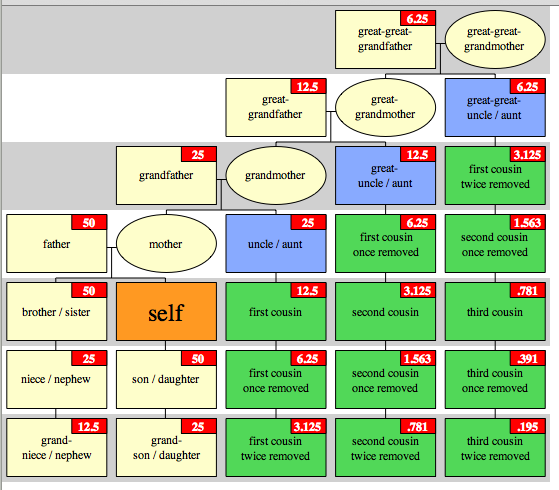 I found a list of “Famous Adoptees” (see bottom of page).  It is comforting to know I am not the only one looking for family.  My mood is changing regarding this search.  Anticipating drama, I’m thinking it might be better to withdraw.

My haplogroup is U5a1a1, found primarily in modern day Ireland.  They are a pretty quiet group on the post boards. “Hi everyone! I’m also a U5a1a1.  My family’s primarily from Ireland.”—out. To connect and share stories with my third, fourth, fifth cousins requires family names to share and compare.

A DNA blogger recommended a site call GEDmatch.  A handy benefit of 23andMe is that the results can be downloaded and added to other DNA sites like GEDMatch.  Another close cousin was found using this public site.  He is a genealogy buff living in Brazil of Jewish/Brazilian descent.  He sent me the proof of our cousin-hood in this format:

His findings came with a warm note, “this is wonderful, we felt embraced by you dear cousin!” It is encouraging to connect with him, with anyone, honestly.

Here is how two sets of DNA look using a visual comparison option from GEDMatch.  Each bar is one of my strands atop another participant.  Color means a match, black is no match. Imagine each bar like a hair comb with “teeth”, solid horizontal color equals 100% match for that section, or “tooth”, and so on.  This graph compares our ancestral connections.

How Do You Identify?

I’m going to take a leap here and say that the “race” question is irrelevant.  In my home I was raised by second and third generation German/Swedish and Irish/French parents.  However, my test shows no German, Sweden or French in my DNA.  My mother’s mid-western cooking, dinner at the table, and Lutheran ethics influenced me more than anything.  So what am I?  Here is what I believe TFN: Family culture, the style in which children are nurtured, forms our cultural identities.

I’ve been watching the PBS program “Finding Your Roots” hosted by Harvard professor, Henry Louis Gates Jr.  Many of the African-American guests discover a surprisingly large amount of European ancestry.  Gates himself discovers that he is 50% European!  He shares that he was raised in a typical African-American home.  He doesn’t “feel” Northern European.  So is he?  Only he can answer that.

Here is a list I found of well known people who are also adopted:

3 thoughts on “DNA Part Five: How Do You Identify?”