dissolves on the floor as a golden square

and rises as a pristine sun

then remains for the first glow of a glorious moon

A moon that radiates light on selfless justice

A message for our past from our future

It did not have to be that way- you had a choice.

And in the choosing doors close, opportunities shift, fail

My heart longs for you. 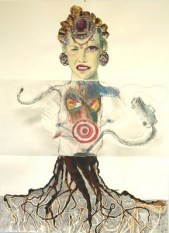 The 10 line poem above was written by 10 people in this way.  Each line created with only the previous line as an inspiration.  I wrote the first line, then passed to the left. What an interesting path the story takes!

The technique was invented by surrealists and is similar to an old parlor game called Consequences in which players write in turn on a sheet of paper, fold it to conceal part of the writing, and then pass it to the next player for a further contribution. Surrealism principal founder André Breton reported that it started in fun, but became playful and eventually enriching. Breton said the diversion started about 1925, but Pierre Reverdy wrote that it started much earlier, at least before 1918.

In a variant now known as picture consequences, instead of sentences, portions of a person are drawn.