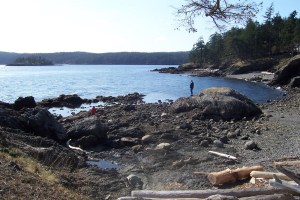 written: Saturday, November 14, 2009
After a hard day there is nothing like heading out to the beach for some wonderful Beach Therapy. This is free therapy time for anyone; you don’t need to contact your insurance company to see if it’s covered by your plan, ya just go. It was hard to believe while skipping rocks with my husband yesterday that we use to spend 90 to 180 min. a day commuting. It’s been two years since we’ve made that major life change. We moved to a small island 2 hours from Bellingham, Washington. Commuting is only 5 minutes to work and school. I’m continually amazed at how much more free time I have. We now spend and average of 3 hours a week on beaches.

According to 2008 statistics there are 128.3 million commuters in the U.S. and 46.9% of the commuting is city related; suburbanites driving to the city. In 2005 the U.S. government reported that Americans spend 100 hours a year commuting. “At a nationwide average drive-time of about 24.3 minutes, Americans now spend more than 100 hours a year commuting to work, according to the U.S. Census Bureau’s American Community Survey. Yes, that’s more than the average two weeks of vacation time (80 hours) taken by many workers during a year.” For over 10 years my average commute time was two hours a day- FOUR times the national average! …and I wasn’t the only one.

The longest commute I ever had was Port Orchard, WA to Seattle. Sometimes I would have to drive 60 miles through Tacoma via I-5, a 90 minute commute on average. If there was an accident on I-5 it could add 30-60 minutes to the commute. Normally I would take the Washington State ferries in. Two boats and a bus. One little boat took me to Bremerton, there I loaded onto a larger boat to cross Puget Sound, and once docked at Seattle I would take the Metro up to Mercer Street.

I had to get up at 4:30am, and would arrive at work by 7:30am; I came home around 7pm. It was insane. Why did we live across the sound? Because, we couldn’t afford a nice house in King County. A nice home in a neighborhood that also had a low crime rate and good schools. It was amazing that thousands of other commuters joined me on this “oceanic migration” every morning and evening. At times I felt “trapped” without my car. When the 6.8 2001 Nisqually Earthquake hit it was almost impossible to RUN home. The port authorities halted ferry service so they could inspect the docks. I was home about an hour later than normal.

When we lived in Tucson my husband and I commuted from the suburbs to the city. Although it wasn’t the longest commute I’ve ever had it was the most stressful. After about a year of commuting I realized that my body was in the sitting position for more than twelve hours a day. I sat in the car for 45-60 min in the morning, I sat at my desk for 8-9 hours, and then I sat in my car going home for 60-80 minutes. When I got home it was around 6 o’clock at night. I was just beat down every night. Kept in a constant zombie like state of fatigue, I made that drive for 5 years. By the time my husband was offered a job to this little town, we were MORE than ready to leave that insane lifestyle. Why would we drive that far for that long? Ironically it was because we both had good jobs in the city that offered excellent health benefits. Health benefits that we would surely need considering the mass exposure to pollution, road rage, bad drivers, fatigue, weight gain and stress.

Now after all those years of commuting hell, we are so happy to be 15 minutes from everything including the beach. My jaw hits the floor when long time islanders say things like, “Oh I don’t want to go ALL the way to Roche Harbor for that. It’s on the other side of the island.” This whole island is only 55 square miles! But then again I’m happy that they don’t understand first hand what real commuting is all about. I wouldn’t wish it on anyone. I’ll just silently nod and am thankful that we all escaped “living in our cars”, to well… just living. It was the best move we’ve ever made.