This semester I took an essay class. The instructor provided us with topics and sources to be sited.  I decided to write about the global water crisis.  This essay normally would be considered too long for a blog post, but the issue has my attention.  Doing research on a topic, exploring it, and developing your own opinion is what writing is all about.  Writing teaches you how to think and converse.  -Shannon Laws

Watching Our Water Disappear: An Overview of the Current Fresh Water Crisis

The surface of our planet is 71 percent water. Headlines in the news often shout about the ever growing water shortage. A citizen naturally may wonder, “How can there be a water shortage when I see water everywhere?” Natural resource experts claim that the problem is not with the volume of water, but with the cleanliness of fresh water. In the last decade more data and research has been collected regarding our planets fresh water resource. Four authors attempt to explain why and how this world-wide contamination happened over the years. The information in the articles help to explain to everyday water users not only how our clean water crises occurred, but what our fresh water situation will look like in the decades to come if nothing is done about it. The authors attempt to sound a worldwide alarm alerting citizens that our primary life giving resource may simply disappear unless extreme action is taken on a global scale.

Cynthia Barnett’s article “Wet Dreams: Water Consumption in America”, is a great place to start this journey of understanding the crisis because of the intimate connection she makes with everyday Americans. She states, “During American’s retreat to the suburbs in the 1950’s large home lots and disposable incomes allowed for a new maker of success: the backyard swimming pool” (1). This is an excellent illustration of first world citizen mentality regarding water. Swimming in a resource that is not readily available to many third world countries can be viewed as gluttonous. Almost every American has access to fresh water in their homes and at work; we drive by fountains, rivers and lakes, and most of the time we are within a mile of the ability to purchase bottled water if we wanted to. Barnett says, “America guzzles about 410 billion gallons of water per day” (3). Whenever I turn a faucet on, water comes out.

Living in the rainy northwest, it is difficult for me to believe that some towns, even in America, have inadequate clean water access. For years Washington State has sold its excess water to California. Washington is littered with hundreds of fresh water lakes, rivers, and streams. The snow build-up in our Cascade Mountain range fills the rivers with plenty of fresh water every spring as the snow melts. State dams, previous generations built, help to keep our power bills low. Washington is water rich. I grew up playing in those rivers; running in the sprinklers, having water balloon fights−where is the problem? 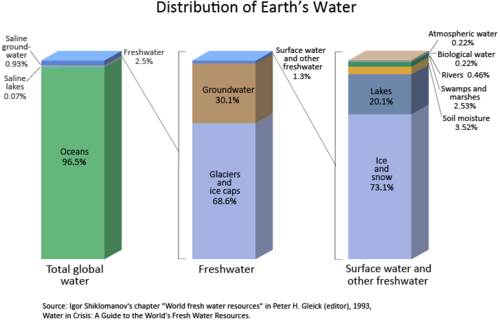 The problem is that even though the Earth’s surface is 71 percent water, only 2.5 percent of it is fresh water. Brian D. Hoyle’s article in Environmental Science: In Context, “Groundwater Quality.”, takes Barnett’s point of view a step farther. Hoyle states, “Because pollutants can remain in the water for a long time, pollution of groundwater represents an even more serious threat to human health” (402). The availability of fresh, clean ground water is decreasing due to pollutants. Humans, farmers and corporations are contaminating our ground water, consumption is depleting it, and it’s all happening faster than the planets natural cleansing cycle can clean it. The water is becoming contaminated by mismanagement, and neglect. Hoyle also explains that too many minerals can also contaminate fresh water. Talking about the infiltration of saltwater, especially in coastal towns, Hoyle states, “As freshwater is pumped out from the subsurface, saltwater that has infiltrated into coastal sediment can be drawn farther inland” (402). Fresh water is essential to human health. We need fresh water, not saltwater, to grow our crops, to cook our food, and to drink.

Industrial trash, various chemicals, and human waste are to blame for destroying a fresh water aquifer; however, what creates a water “crisis” varies greatly. In some cases the water supply is the issue, while in other developing countries, pipe infrastructure and water treatment quality can constitute a crisis. In her essay, “Billions of People Will Run Out of Fresh Water by 2050” Gayle Ehrenman, writes “…the World Water Report predicts that by the middle of this century, at worst, 7 billion people in 60 countries will be short of water; at best, 2 billion people in 48 countries will suffer shortages” (2). I saw poor city planning jeopardize the fresh water supply for hundreds of southwest suburbs. When the southwest was in a nine year drought, the city continued to build homes despite the heavy pull for water from local agriculture, industry, mining and cattle ranches. The city did not heed the warnings of biologist like Ehrenman.

From 2002 to 2008 I lived in the high desert city of Tucson, Arizona. I saw the city go from water shortage to crisis first hand. When the national “housing boom” was in full swing, it seemed as if new neighborhoods were going up overnight. It was a shock to learn that many new neighborhoods had no water. The city was trucking water into the new subdivisions. The local news reported the city issued construction permits knowing there was no water for the homes, and yet the homes were built and people moved in. By mid-2008 the bubble burst, and many homes foreclosed and neighborhoods turned into ghost towns. There was insufficient water to support the dense population. It was unbelievable to watch.

Ehrenman shares many ideas to help solve our fresh water dilemma. Some countries are considering the expensive process of desalination, others are actively recycling and reusing waste water, and some are specifically looking to improve the efficiency of farming irrigation. She states, “Averting a water crisis is a massive undertaking that will require a combination [of] conservation, new technology, and cooperation among competing interests” (4).
The first three articles touch on the crisis and explain the cause, effect and provide predictions of the worldwide fresh water shortage. However, author Mingquian Li looks behind the veil at the business side of water management and reveals a juggernaut of greed designed to control an entire nation’s water supply. Her discovery educated and enraged me instantaneously.
The privatization of the Earth’s fresh water supply complicates the goal of clean water for all. Mingqian Li tackles this issue in her paper, “Walking on the Tightrope―Can Water TNC Tackle Drinking Water Crisis in Developing Countries”. In Li’s article she states transnational corporations, or TNCs, occupy over 80 percent of the market for water and sewerage services. Our politicians are unwilling to take money out of these corporation’s pockets the same corporations that may fund many political campaigns.

Producing a quality product does not seem to be a priority for these powerful corporations. Under current legal and economic conditions monopolizing a nations water supply allows TNC’s to rake in high profits regardless of the quality produced because everyone needs water, even dirty water. In some countries such as Mexico and Brazil, with TNC run water supply of poor to unusable standards, Coca-Cola offers its bottled water products at two to three times the global price per unit. This is an unfair business practice and an outrageous maneuver against humanity.  Water is essential to life, it is not a product humans can stop using for a month to save money, such as expensive coffee drinks. Li shares, “Many health problems can be traced back to inadequate and polluted water resource. An estimated 3.4 million died because of either direct consumption of contaminated water or diseases infected by organisms living in polluted water” (122). Reform of existing management systems would work to bring down those numbers.

Whether a TNC or a government runs the water system for a city or country, accountability and capping profits at a reasonable level are elementary steps towards a solution. Removing the profitability of water management may force governments and corporations to focus on the issue at hand: clean fresh water is essential for everyone. In the current political environment the citizen often feels like a “David” fighting “Goliath”. The basic human right to clean, fresh water at an affordable price seems possible, if our current leaders will hear the voice of their people and if the people demand better.

Ehrenman, Gayle. “Billions of People Will Run Out of Fresh Water by 2050.” Mechanical
Engineering, 2007. Web.