Last night at Poetry Night’s open mic I ran into another Mary Oliver fan.  I find it exciting to meet new people and hear their story.  This poetry fan told me she doesn’t write poetry, she just comes to listen.  However, one night, about six months ago, she read the Mary Oliver poem “The Journey”.  I was happy to hear this because I was reading that same poem that evening, along with an older poem of mine called “Droplet”
( http://splawssji.blogspot.com/2010/09/droplet.html ).
The conversation was started!

Naturally I asked her what drew her to that poem.  She said she’s always love Mary Oliver but the poem “The Journey” struck a cord in her.  She went on to share that last fall she was going through a transition and it was as if the poem was written by her own heart.  She was touched by it. It was a wonderful experience to get up in front of a crowd and share her feelings- even though they were written by another- they expressed how she felt that day.  Last night I was also feeling that way and for a brief moment we were in accord.

Poetry is like any other art form.  One hundred people can view/read it and you’ll get one hundred interpretations.  Good work will speak to to you, move you, change you if only for an instant.
Art is powerful! 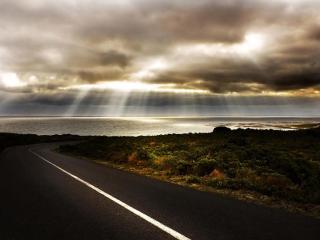 One day you finally knew
what you had to do, and began,
though the voices around you
kept shouting
their bad advice–
though the whole house
began to tremble
and you felt the old tug
at your ankles.
“Mend my life!”
each voice cried.
But you didn’t stop.
You knew what you had to do,
though the wind pried
with its stiff fingers
at the very foundations,
though their melancholy
was terrible.
It was already late
enough, and a wild night,
and the road full of fallen
branches and stones.
but little by little,
as you left their voices behind,
the stars began to burn
through the sheets of clouds,
and there was a new voice
which you slowly
recognized as your own,
that kept you company
as you strode deeper and deeper
into the world,
determined to do
the only thing you could do–
determined to save
the only life you could save